Give in Memory of Loletta Lita Grant in lieu of Flowers 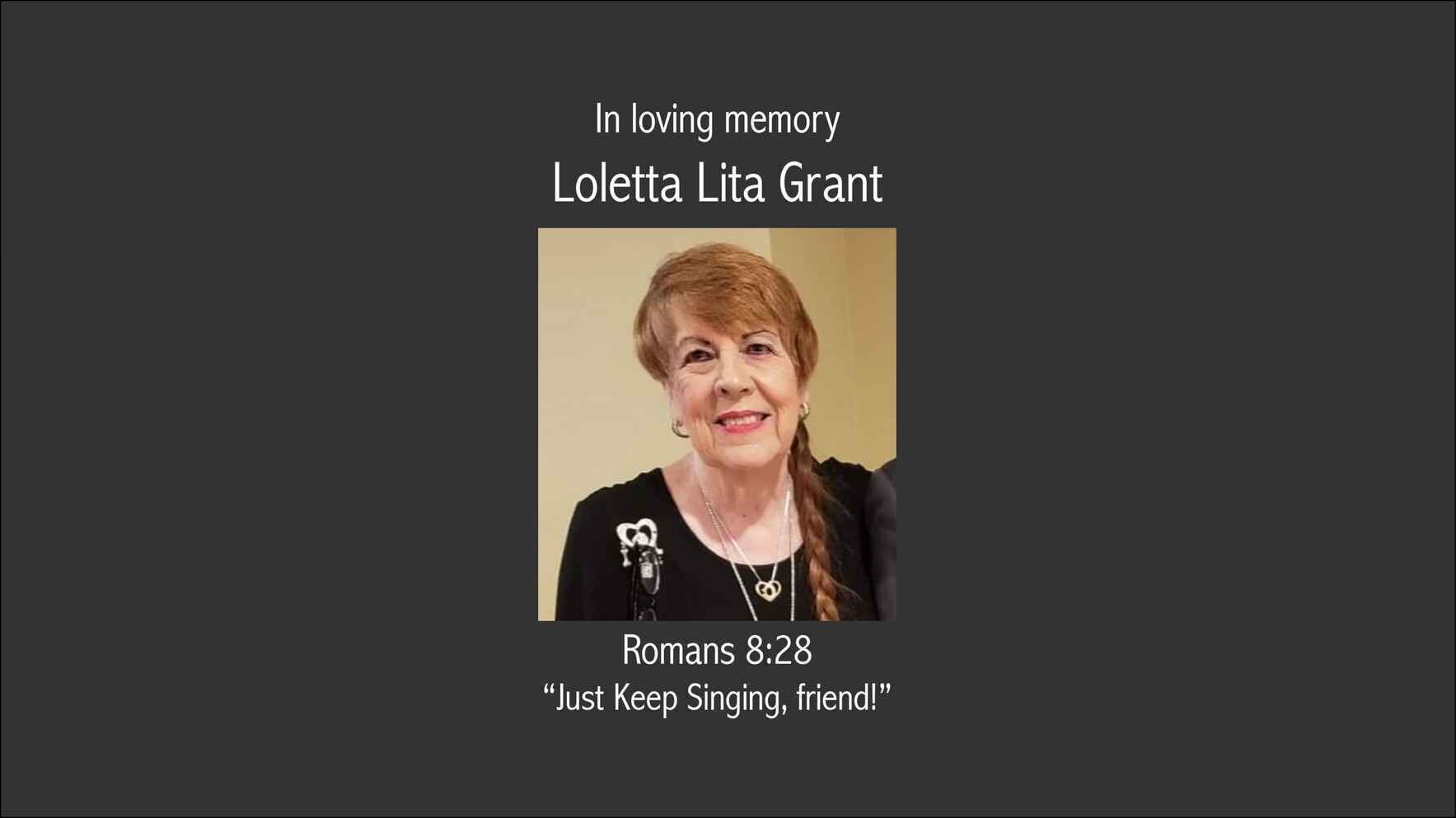 We are no longer accepting donations on this campaign, but there are other ways for you to support us today!

Give in Memory of Loletta Lita Grant in lieu of flowers

In Memory of Loletta Lita Grant in lieu of Flowers. “Just Keep Singing” friend. Thank you for supporting the SGMA in Lita's memory. Southern Gospel Music & the SGMA are dear to Lita's heart. God bless you all. Romans 8:28

Loletta Diane Brown Grant passed away on April 30, 2022. She was born in LaGrange, Georgia on February 24,1942.
Loletta was preceded in death by her husband Jimmy Douglas Grant, her mother Florence McKeehan Brown, and her father Oliver Austin Brown. She was also preceded in death by her brothers Michael Brown and Billy Brown.
She is survived by her daughter in love Vickie Lawson, brother Vernon (Bud) Brown (Frankie), sister Vivian Morgan, sister in law Patricia, Branford (Bob) brother in law and Norman Grant (Anne). Several nieces and nephews also survive.
Lita, as she was known by, graduated from Roswell High School and still had many friends from those days. In her early years she worked for Dunn and Bradstreet but later became an entrepreneur and had two ceramic shops, an auction and later was heavily involved in antiques. She had several antique malls and an antique auction. This was her love for 30 years. She retired in December of 2020.
Lita loved southern gospel music with her whole heart and attended concerts all over. She never minded riding for hours to see her favorite groups. She had a giving spirit and found ways to support these groups and the Southern Gospel Music Association (SGMA) by selling albums, cd’s and memorabilia. Lita and Vickie organized the first Dr. Jerry Goff Memorial benefit concert for the SGMA. Lita helped raise thousands of dollars for this cause.
Lita was in a CB club back in the 70’s and her club was asked to be in “Smokey and the Bandit” movie. She was in the convoy and always thought that was very special.
The service will have a little talking and southern gospel singing by some of her favorite artist. Music by The Troy Burns Family, Travis and Alecia Bridgeman, Debra Perry, Melvin Klaudt, Mike LeFevre, Jeremy Peace, Tim Jennings, Glorybound Quartet, Jacky Fortner and Bob Sellers. Linda Autry on the piano and Rudy Autry on the Bass.
Travis Bridgeman, Scott Smith and Scott Huskins will have the service. Pallbearers are Tim Brown, Tony Page, Ricky Hitt, Tim Jennings, Derek Durham and Brad Rickson.
Visitation will be Tuesday, May 3rd from 4-8pm. Wednesday, May 4th from 10am until the funeral at 2pm.